I started out as an historical fiction author although my interests have since broadened into non-fiction, more specifically related to researching little-known stories from history and genealogy.
Print copies of my earlier books may still be available in some libraries and second-hand bookstores. 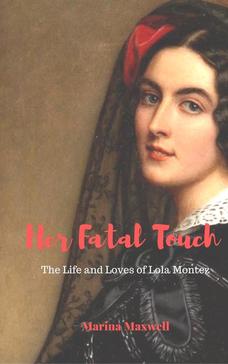 A new e-edition of HER FATAL TOUCH: The Life and Loves of Lola Montez is now on Kindle.

Then one night on a ship in the Pacific Ocean an event would take place that would change her forever.

This biographical novel explores both the public and private sides of this infamous woman and seeks to find reasons for her behaviour that may have had its origins in childhood neglect and a disastrous first marriage that locked her into actions from which there was no escape.

Alexandre Dumas said she had “the fatal touch” when it came to men. So why did so many of them become her victims? And which man, above all others, held her heart?

Lola is mostly remembered for her outrageousness; for her lies and fantasies, her fiery temper and shameless conduct. Rarely credited for her acute intelligence, she had many other qualities that today would be admired rather than despised, such as her hatred of racial intolerance and her championship of national freedom, her aversion to religious influence in governments and her support of the disenfranchised. She was a contradiction; a puzzle; endlessly fascinating, she truly was one of a kind.

From reviews of TIME AND A LEGEND: a Novel of history

"This tale of fact and fiction … is one of the most engrossing I've read for a long time … Adding to the entertainment are Maxwell's vivid descriptions of the murder and mayhem of early Sydney; her lyrical description of the South Coast and the Monaro;
Don't wait for the film or mini-series that, surely, this book must be turned into. Get the book now ….  and get in the queue behind me for her next book 'Land Of The Long Grass'."
Canberra Chronicle

"…. A brilliant imaginative interplay of fact and fiction … makes for absorbing reading …. A lively novel which will repay a second reading, and I have no doubt that it could make a powerful four-star film …"
The Canberra Times

From reviews of THE LAND OF THE LONG GRASS

"... a glorious book to wrap oneself in ..."
​Book of the Week, Durban Independent

" ... Author Maxwell writes with zest and feeling and it makes for an entertaining read."
Natal Witness

"This conveys the beauty of Africa  ... and the courage of the people …  The reader knows it is fiction but yet there is a 'willing suspension of belief'. And by following the lives of these characters, we learn something of  the history of our times..."
The Cape Argus

"Land of the Long Grass is a masterful novel. An evocative story of adventure, love and a quest for belonging"
Newcastle Chronicle

Time and a Legend: a Novel of History

One wintry day in 1842, a sleek yacht named the Wanderer sails into Sydney Harbour. On board is a wealthy, handsome and dangerously charismatic man named Benjamin Boyd who soon has the local society enthralled, not only with his display of wealth and lavish parties but with his force of vision for the land of Australia.

As Boyd casts wide his personal ambitions, many find themselves entangled in his web and in games of deception, deceit and intrigue, of exploitation and revenge, even murder ...

And it is Fate that chooses those players who must pay the ultimate price for their passions, their greed, their hate - or for loving unwisely, or loving too well - and for placing their trust in a legend.


Land of the Long Grass

In the late 19th Century, the scramble is on for the mysterious, rich lands north of the Zambezi River that are ripe for exploitation by imperialists, slavers and missionaries. The local inhabitants cling to the traditions and superstitions of an ancient Africa rapidly diminishing under the onslaught of progress.

Thrust into this turbulent setting is a woman who challenges the male bastion of medicine in Victorian England but discovers that her greatest tests will come when she encounters the enigmatic adventurer, Harrison Clark … a man of defiance and courage ... of extraordinary destiny and who will change history ... this man known far and wide as Changa-Changa.